You are here: Home / The Good Life / Week in review (March 1-7) : Five Karate Moves to Success 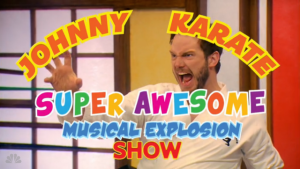 A few weeks ago, Parks and Recreation dedicated an entire episode of its final season to Andy Dwyer’s cable network kids show, The Johnny Karate Super Awesome Musical Explosion Show! If you don’t know what any of that means, it’s okay. Just know that a) Parks and Rec was great, and you should check it out at some point if you haven’t, and b) the children’s “educational” show was structured around Johnny Karate’s “Five Karate Moves to Success.” These moves are: Make Something; Learn Something; Karate-chop Something; Try Something New (even if it’s scary); and Be Nice to Someone. For me, this sounded like a great general philosophy, so I thought I would give it a try and report back. This is my first installment.

In addition to the writing I did this week, Theo and I also made some decent artwork. We painted lines and circles and various other shapes with his watercolors, and I made a number of Play-Doh animals, including a shark, a sheep, and a horse. I think I could be a little more intentional with my making next week.

I listen to many podcasts during my commute and while doing other stuff that doesn’t require much thinking (mowing, dishes, etc.), so I come across new information all the time. In retrospect, one podcast that stands out to me is the Freakonmics episode, This Idea Must Die. Rather than offer some interesting , new idea, Steven Dubner asked a bunch of experts what particular idea they thought needed to be retired. Among some of the more compelling were our conception of the universe (instead of a multiverse), the idea that “the market” is good or bad, and the belief that atheism is a prerequisite for scientific inquiry. One of my favorites was Alan Alda’s suggestion that we stop thinking that something has to be right or wrong, true or false, by which he meant retiring “the idea that something is either true or false for all time and in all respects.” My typical response to whether or not a statement is true is, “it depends,” which can be frustrating for whomever I’m in conversation with. But so much depends on the particular situation and person that I hate to limit my perspective when I can avoid it.

I don’t think I excelled in this area this week. I didn’t literally karate-chop anything, and I can’t say that I totally crushed anything figuratively either. Another area for improvement.

I went to a dealership for the first time this week, at least for the first time with the intention of buying a vehicle. Thus far, I have managed to buy my rides from individuals (or have them gifted to me). It was a pretty strange experience on the whole, complicated by Theo’s presence and the fact that we weren’t really excited about getting a minivan. Not that I have a problem with minivans, but Melanie and I both felt somewhat forced into the situation because she’s having twins. So, it wasn’t an expense we had necessarily foreseen. I don’t actually want to go into all the details here, but I will say that we managed to find a great deal online, and we feel fortunate that we have a reliable ride for the family.

Overall, it was a positive experience. It was also one that I don’t think you can really prepare for that well just by reading about it. I’ve seen plenty of information about working with salespeople and dealerships, but I feel like it’s a situation you really have to go through a few times before you’re comfortable with it. But it is also an experience you don’t really want to practice because that implies that you’re constantly buying new cars.

Again, I think I could have done better in this area. I did tell one of the security guards at work that I liked his sweater. And I complimented someone’s dishes. I think it’s best to make an effort to do something nice for at least one person every day, so I need to be more intentional about it.

So, that’s this week in review. It looks like I have some work to do; really only succeeded in two out of five of the karate moves for success.  Hopefully this information isn’t completely dull and useless. I felt like it might be interesting to start keeping tabs on my own self-improvement and to share that progress with you. We’ll see how it goes and whether or not the Johnny Karate path is the best framework to use.

Thanks for reading. Did you achieve any epic karate moves this week?