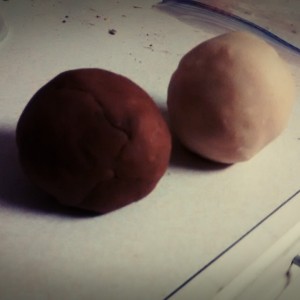 This is the second installment in my path to enlightenment via the Five Karate Moves to Success. Maybe enlightenment is overselling it a bit. This is just my review of the previous week, which highlights my attempts to follow the framework of the Johnny Karate Super Awesome Musical Explosion show. This week I tried to be a little more intentional about performing the moves to success. Still, I think I did a mediocre job for the most part, but at least that provides me some material for practicing honesty.

Most of our official Play-Doh has managed to dry out and make its way to the trash, so I thought I would try making some DIY play dough. It’s a little hard to believe that I haven’t done that yet since we have a two and a half year old, but this was the first time (I won’t double count it as Trying Something New). I ended up using this recipe, which I just found via Google. I didn’t do much research because I basically decided to try it on a whim after work one day. I was likely motivated in park by ensuring that I intentionally made something this week. It didn’t turn out all that great. It looks basically like Play-Doh, but I ran into a few problems.

The main issue is that it is very sticky. I don’t think I cooked it quite long enough, but it seemed fine at the beginning. It just got stickier with time, especially after putting it in a sealed bag for a day. Next time I will try cooking it for longer and maybe storing it something else? I also didn’t really think about how to make it colorful. We don’t have any food coloring on hand, or powdered paint, or anything else that seemed appropriate. I read that someone used cocoa powder (which I think they used mostly as a scent), so I tried that with one of the balls and managed to get a decent brown. It also makes your hands smell like chocolate, though. Theo didn’t actually try to taste it, but Rory (the dog) did. I was going to try to post an image of something we made with our dough, but it didn’t hold its shape well. Overall, the was mostly a failure, but it’s one I’ll try again. Also, it made me think of bread making, which is nice.

My MFA thesis was a short novel about insurance. Rather, it was about a guy involved in the insurance world. One thing I learned this week is that I was in no way qualified to try to write about that topic. Insurance, specifically health insurance, is an ugly and convoluted beast. But that’s not actually what I want to talk about.

This week Radiolab shared a compelling story about the Fu-Go, a little known initiative conducted by Japan in World War II. The gist is that in response to the Doolittle Raid (which was a response to Pearl Harbor), Japan explored ways to bomb the US mainland even with an overextended navy. An experiment they actually tried was to send giant balloons across the Pacific in the jet stream. They devised an elegant system using altimeters and sandbags that would allow the balloons to make it all the way across the ocean, where they would begin dropping bombs and causing general terror. I had never heard of any of it and found it quite fascinating. The podcast can be found at Radiolab. They also have some great images. FYI: while the story is mostly just entertaining, they do discuss one of the very few “successful” attacks, which includes a heart breaking interview.

I guess I forgot this one again. Or, I didn’t really find an appropriate time to karate-chop anything. Theo and I did play “hitting” numerous times. This game involves repeatedly slamming and/or throwing stuffed animals into each other. But it isn’t really karate-chopping.

I’m going to use the switching to Dvorak experiment here since that was my original intention. But I won’t fall back on it every week. It has been a challenge, and I’ve learned quite a bit, much of it not related to typing. I think that’s one of the benefits of trying new things. It expands your perspective in ways you might not have expected. You can read this Dvorak post for more details.

I tried to put more thought into being nice to people this week. At the moment I can think of only a few instances. I complimented a co-worker on her hair when I noticed it was different. I slowed down to let some people by in traffic. I sent what I believe were personal and thoughtful messages to a couple on their anniversary. I spent part of an afternoon doing something I know was important to Melanie.

I don’t think any of these need further details. I will say that it feels good to make kind gestures, even when they’re small.

And now we’re halfway through March, which feels pretty wild to me. I hope you make some moves to success this week. Let me know if you have any good ideas for stuff to karate-chop.