You are here: Home / The Writing Life / On inertia and mowing: Time as an enemy 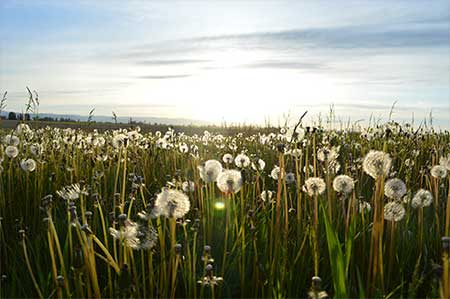 When I mowed the lawn for the last time in the fall, it was pretty ugly. We were just at the edge of the growing season, when the grass still grew but not very quickly, and I had been putting it off because I was thinking it would probably be the last time I mowed before winter. This wasn’t a nostalgia thing; it was a game of chicken where I was hoping to wait out the grass so I wouldn’t have to mow an extra time. Eventually, I decided I would get the job done before the HOA politely suggested it. (To be fair, our HOA is typically polite even when it doesn’t feel that way.)

By this point, the grass was fairly thick where there was still grass, and where there wasn’t, the weeds had started to get a little too comfortable. Dandelions spread out in all their invasive glory, and other plants whose names I do not yet know grew thick with an unperturbed arrogance. Overall, it was a bit of a mess.

The thing about mowing is: a) I don’t really like doing it, and b) it gets harder when you put it off. I know this. I grew up mowing lawns: as a chore, as my first job, as a way to make extra money in college and grad school. When you wait too long to cut the grass, the lawn develops in a number of undesirable ways.

The grass itself grows tall and wants to clog up the mower. It’s harder to push because you’re actually bending over tall blades of grass before whacking them off with the blades. That also means it doesn’t cut as evenly, so you often have to revisit a swath that has already been cut.

Weeds that are usually dormant, unable to gain a foothold because they are kept short, shoot up and start to spread quickly. When they grow large, the only recourse might be to remove them with a shovel (or some fancy gadget you can buy off an infomercial). While weeds come in many varieties, with different recommended solutions, the general advice for almost all of them is to mow regularly to prevent them from taking over.

Silver-lining side note: when you do have a whole host of weeds and a toddler who loves to be outside, you can make a game of the clean up. To take advantage of Theo’s fondness for putting things in containers, he and I played a game where I would dig up a weed and he would carry it to a trash can across the yard. He seemed to have a decent time with it. (I’m always on the lookout for ways to make him a little more useful, so feel free to make suggestions.)

All these problems are compounded and make the mowing more difficult. The edging/trimming takes longer, and there’s more grass to sweep/blow away. Leaves are more of a problem when there are leaves. And so on. It just feels worse. While I know all this, I still find myself waiting too long. Sometimes it’s just the nature of the weekends; sometimes I get involved in other tasks; sometimes it’s the weather. But once the pattern begins, it’s difficult to break because I know it’s going to be tougher. So, I put it off, which makes it even worse, and you get the idea.

Once I finally do get out there and mow, however, it isn’t actually that bad. It’s just something that has to be done, and I appreciate the clear, visual progress of turning unmowed into mowed. Like much physical labor, there is a certain satisfaction to seeing your finished work. Plus, it doesn’t hurt me to get outside and move my body around a bit. Double plus, I typically listen to podcasts while working, so I enjoy that aspect. I also appreciate knowing that I was able to save us some money by doing something simple, a task that is almost second nature by this point.

I find this to be a pretty decent parallel with writing. When I do it on a regular basis, when I make a point of putting in some time, whether for a specific project or not, it comes much easier. The wheels are greased, and things move as they should (just to mix our metaphors a bit). But when I start to put it off, it begins to feel like a chore. I begin to forget the mechanics and dread the idea of looking at a blank page. This happened to me last year, and it took almost an entire year to get myself straightened out. (The HOA never would have let such a grievance stand.)

Inertia is a powerful force. You can use it to your advantage, or you can let it hinder you. When you create some momentum, it’s easier to keep it going, whether that momentum is productive or destructive. Every time you stop, you make it more difficult to get moving again. So, if you’re currently moving in the direction you want, even if it’s slowly, be sure to keep that going. If you’re stuck, look for small actions that can start pushing you again; allow small victories to build on each other and increase your momentum.

Just one more piece of advice: if you see mushrooms in your yard, pull those suckers up! Do it when they’re small or you’ll be doing it for a while.

What tasks do you put off and then regret? How do you find your way back?