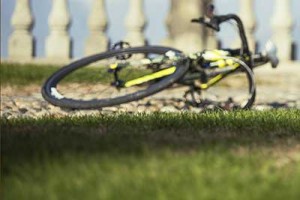 Walking with Theo and Rory, I approached a young kid, eight or nine, having a blast on a razor scooter. I know, I didn’t realize they were still around either. He was pumping along until he built up enough speed to blast though the puddles accumulated next to the curb, spraying miniature wakes across the street.

Just as we got within earshot, he managed to lose his balance in a puddle and wipe out. Not a serious one. The scooter shot out in front of him, and he landed on his butt. He popped up right away, and before I could even get my “yikes, ugly wipe out” expression fully formed, he had blurted out an unsteady “I’m okay,” grabbed his scooter and headed back to his driveway.

It reminded me of my first minor incident on a motorcycle. I was headed home in a slight mist, about to glide into the parking lot when I realized I was going a little too fast. Not having that much experience on a bike, I hit the back brake a little too hard and laid the bike down. I jumped up immediately, and my first reaction was to look around, wondering if anyone saw. There was no one else on the street, however, so I was able to feel how much my finger hurt while pushing the bike into my parking spot.

It wasn’t a nasty spill, but it did result in some scratches (on me and the bike) and a fractured fingertip. Maybe if it had been more serious, my first thought wouldn’t have been one of embarrassment, of wondering whether or not there was an audience. I wonder how the kid on the scooter would have reacted if we hadn’t been there to see his spill.

This is often the case when we fall, literally and figuratively. We are aware of how many eyes are on us, and we don’t want to be embarrassed by our failures. I think that’s natural, but it can become an issue if it prevents us from exploring our creativity. If we think too much about who might read our work–what they will think, whether or not it will be a huge failure–we might not ever start writing. We might give it up in the middle, after second guessing our idea. Or, we might even finish the work, then lock it away forever because the fear of criticism wins out.

Granted, a critical eye is essential for improving your writing. But you can’t allow it to stifle all your ideas before they have a chance to take shape. You can’t be so worried about what other people might think that you aren’t willing to blast through the puddles. Sometimes, it’s best to take the “dance like nobody’s watching” approach to writing. Then, when you’ve put some effort into the piece, you can make a decision about what to do with it.