You are here: Home / The Family Life / Thoughts from Theo: It’s Hard to See Eye to Eye With a Toddler 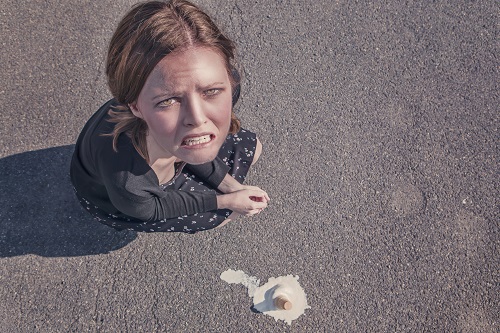 Theo and I sometimes butt heads. That’s probably an understatement even though we get along for the most part (and I’m sure this is one of things that will peak and valley as time goes by). Excluding cases of sheer toddler defiance, which represents a healthy portion of our goat like behavior, I’ve noticed a common factor in our disagreements: miscommunication. This should come as no surprise since it is the major factor behind most arguments. But I want to discuss one particular version of this for now because it’s one that is mostly my fault.

Often what happens is that my expectations do not match up with Theo’s. I suggest, quite logically as far as I’m concerned, that maybe we shouldn’t have a cupcake after dinner because we ate so much fruit with dinner. Or perhaps we don’t need to play on Dad’s phone since we just finished playing on the laptop. His response is probably crying or a more defiant way of expressing his frustration.

Just this evening, he and I went to the pharmacy to pick up something for Melanie and a few items we (I) forgot to get while grocery shopping yesterday. While there, we explored the aisles and spent an almost inappropriate amount of time perusing the Easter displays. Theo loves Easter eggs. He enjoys opening and closing them, storing toys in them, and finding surprises. They are toddler gold for the most part.

I tried to point him away from all the candy (there is so much candy) but ended up grabbing some plastic eggs and a few selections of small chocolate eggs and bunnies, which I didn’t really think he saw. He was focused on the eggs, ready to open them. He even asked if he could open them in the van, but I told him we should wait until we made it home.

Once we were back, he immediately took the eggs back to show Melanie. We opened the bag for him, and he dumped them on the floor. He then started to shake them, one by one, and open them. I realized he thought they would have some kind of surprise in them. I tried to ward off his disappointment by telling him that they were all empty.

He didn’t listen, though. Instead, he shook and opened every egg before looking at us with a disappointed, dejected face that only a kid can pull off. So, failure of communication one for me.

Then he said, “I want the little eggs,” and took off toward the kitchen.

At this point, I was pretty sure I was in for trouble. As I followed, I tried to explain that, “we’re not going to have the little eggs right now because we’re about to eat dinner.” But he wasn’t listening.

He found the little chocolate eggs and handed them to me, ready for me to open them. Again, I tried to explain that this wasn’t the plan. The chocolate eggs were for later. And then he really had a melt down. The full blown ear-splitting kind that took the next twenty minutes or so to move past.

That’s how it went for me, anyway. I’m sure his version feels much different. It probably feels like betrayal or dishonesty instead of patience and understanding.

My mistake was that I didn’t anticipate his expectations. I had my own vision for the future, and I failed to realize that his might be different. His reactions are sometimes extreme–because he’s hungry, because he’s tired, because he’s a toddler–but I can’t really fault him for being upset. I didn’t do a decent job of relaying my plan to him. I didn’t let him know that the eggs would all be empty or that the chocolate ones weren’t for immediate consumption.

This happens with adults too, especially with people who are close to us. We expect them to know how we’re feeling, what we’re thinking. We might sit alone in a room, just waiting for them to realize that we’re upset. It’s easy to see this as unfair from the outside, but it is also an easy trap to fall into.

I think we can create similar problems for our readers. We can expect them to read our minds, to know our characters as well as we do. Too often, I think we are so familiar with “don’t tell” mantra that we forget the “show” part.

Should we treat our reader like toddlers? Maybe. We should be patient with them and provide them all the information they need to make good decisions. But we shouldn’t do the work for them, even when they cry about it.

This won’t always keep everyone satisfied, but it is a good start.

And at least we rarely have to look into a readers teary eyes when we’ve let them down.