You are here: Home / The Good Life / Thoughts from Theo: Why are we doing all these things? 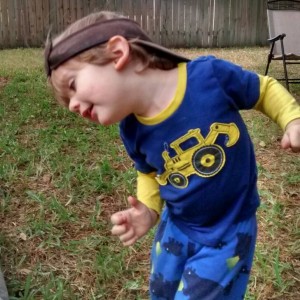 The other day Theo and I were playing in the backyard. One of his favorite actvities is to dig dirt from what used to be a pit of aloe vera plants before he and Rory (the dog) started to slowly destroy them. I say pit because I think before the plants it was some sort of fountain/water feature. Now it is like a mini swimming pool filled with rich soil, which Theo likes to scoop out and then pour into some other container, typically another shovel or bucket, before transporting it either to another hole (we have a few) or just to a different spot in the yard.

On this particular day, he would scoop some dirt then dump it into my shovel and then wait for me to dump back into his. Then we would walk across the yard where he would flip the dirt next to a tree. Sometimes there was running around without dirt. Sometimes there was some dirt just thrown into the air. At one point, after he had carried a scoop and tossed it next to a tree, I told him what a great job he was doing. His reply was, “Yes,” with a smile, followed by, “Why are we doing all these things?”

To which I replied, “I don’t know. What do you think?” That’s what I usually say when I want to find out what his real question is, or when I really don’t know the answer. In this case, I really didn’t know the answer because it was his game, and he was leading the way as far as what we were up to.

Why were we doing all those things? Why are we so often doing all these things? I realized I don’t ask myself that question enough. My daily life is filled with the doing of things, but they don’t always have a purpose, not a stated one, or not a considered one. These things are sometimes small. Why do I seem to leave socks all over the house? Or why do I wash dishes the way I do?

When Melanie and I were engaged, we did some pre-marital counseling, and I remember a story from the couple we were meeting with. The woman said that when she made a roast, she always cut it in half. After she and her husband had been married a little while, he asked her why she did that. She said it helped it cook more evenly or that it absorbed more flavor that way or something along those lines. Then she started to think about it and realized she did it that way because that was how her mother cooked a roast. The next time she talked to her mother, she asked her why she cut the roast in half, and her mother responded, “because when your father and I first married, our pan wasn’t big enough to fit a whole roast, and I guess it just became a habit.”

Stuff like that doesn’t really matter until we get into an argument with someone about whose way is better. But so much of what we do is like that: at some point, a behavior was formed and then passed along until it became a tradition or the way things are supposed to be done.

Which is fine for the most part, but I feel like I often allow the big stuff to travel that path too. If I stop to consider, “why I do all these things,” I am confronted with some rather important ones. Like, why do I go to work every day? Or, why do I choose to eat food I know is not good for me, or watch television when I know I’m not getting anything from it? Or why do I feel like checking my phone is more important than giving my full attention to whomever I am spending my time?

The answers to these questions aren’t always going to be a revelation. Usually they won’t. But the practice of asking them is one that can lead you to either have more confidence in your daily decisions or cause you to maybe make some changes.

As for Theo, I think he answer was probably in line with one of the mottos of One Fish Two Fish, Red Fish Blue Fish: “These things are fun, and fun is good.” Which is often all the reason you need.

What is something you do without thinking? What is the source of that behavior?