You are here: Home / The Family Life / Thoughts from Theo: Beware the law of diminishing returns 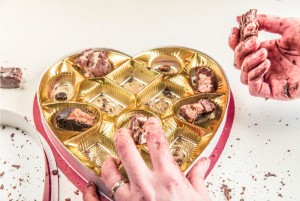 Theo and I play a game where we flop around while making sounds that are hard to describe. Some of them might be compared to a slide whistle, while others are closer to a fire engine or honking horn. If you time the sound with the flopping just right, and it’s weird enough (the sound or the movement), it can elicit a laugh. When you get a few of these going together, the laughs build momentum and it’s a great time. Soon, even sooner than I would hope, it takes a little more effort to get a little less of a laugh. We reach a point of diminishing returns. So what do you do then?

My response, because I’m old and wise and know of lots of great ways to have fun, is to think, “Alright, that was nice. Let’s move on to something else entertaining.” Theo’s response is to escalate, to make louder sounds and larger flails hoping to regain that fleeting sense of joy that came at the beginning. It’s very much a drug, and I can’t blame him for chasing it. But as he keeps trying to get back to that point of pure gaiety, the laughs feel forced and it begins to be more frustrating than rewarding.

I used to go through a similar cycle with my younger brother. He’s six years younger than I am, so when I was in high school, trying to understand what being cool and distant was all about, he was a scrappy pre-teen with boundless energy. We would have a great time rough housing, putting each other into various invented holds and generally just being obnoxious with our mostly tame attempts to cause each other minor pain. Eventually, we would reach that point though, the one where we had moved beyond the lighthearted play. One of us would be a little sharp with a slap or a poke, or accidentally strike the other in the nose. Almost always, these escalations would be accidental, but they would almost always be followed by further escalation.

As the older brother, I would usually be the first to realize that we were on the edge of just having fun. Maybe it was my own temper flaring, or maybe I could see it in him, but I would sense that the mood had shifted. Or maybe I wasn’t always the one to see it coming, but I was generally the one who would try to do something about it. I would try to end the game before it got too real. He rarely wanted to stop at this point, though. Maybe because it wasn’t ending on his own terms, or maybe because he felt slighted and need to get the last shot in. Whatever the case, the playing often devolved to a point where I felt like I had to inflict enough pain that he was no longer interested in continuing. Not an MMA sort of pain, of course, but something to get his attention.

I can remember one instance when we had reached that point, and I was shoving him into a door, pressing his face up against the wood. After each push, I would ask if he was finished, tell him that I didn’t want to do this anymore. But he was stubborn and wouldn’t give in. Or he was determined, I don’t really know how to describe it exactly except to say that I felt bad about what I was doing and at the same time didn’t feel like I had any other choice. I actually feel that sinking in my stomach as I type this, remembering how out of control I felt trying to make him just let it go. I remembered that feeling each time he asked me to wrestle with him, each time he claimed that we would stop whenever I wanted to or before we went too far. I made me not want to play, but I don’t remember ever putting a full stop to it. I probably wasn’t mature enough to figure that out. I was just mature enough to feel bad.

We find ourselves in this situation all the time. We found something that works, something that makes us feel good or successful, and we chase it. We pursue it, hoping for just a little more of the joy we first experienced. I found this often in video games, where I had already made all the big accomplishments but then played on for hours trying to complete one level perfectly.

In writing, this sometimes takes the form of beating an idea to death. We find a topic that works, and we don’t let it go. Or we overwrite to the point that we’ve destroyed the original beauty we saw. Or we try to write perfection without letting our projects breathe. And in the end, we’re left disappointed. It’s a tough situation because we don’t want to give up pursuit altogether. But we also don’t want to keep experiencing the pain of having gone too far.

With Theo, the path is probably straightforward. We indulge in what makes us laugh when we can, and we’ll keep driving at it until we find our limits. I’ll reach mine much sooner than he will because we haven’t discussed the law diminishing returns yet. But I’ll keep playing because I want to have those experiences with him, and I want to watch him find his own boundaries. It takes patience, but that is a fairly small investment. I mean, you should hear him laugh.

It does serve as a good reminder for me, though. And I try to think about it in my own pursuits. When am I continuing down a path because it once made me feel good? Or when do put in maximum effort for minimal returns?

Do you have any small pleasures that became an obsession? Do you still find them rewarding? How can you be on the lookout for when you’ve crossed the line?