You are here: Home / The Good Life / Sometimes It’s Best to Not Know You’re out of Place 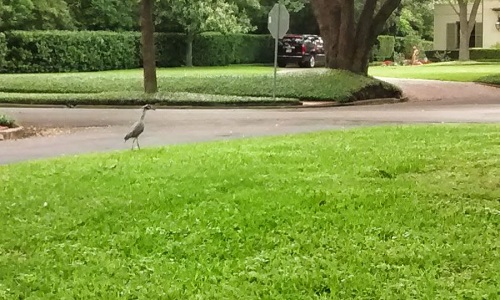 The other day while walking at work, I came across the bird in this picture and thought it was the most out of place thing I had seen in a while. (I know, I wish I had gotten a better shot too.)

It struck me as almost surreal, an elegant, colorful, spindly, waterfowl in a place where I normally just see pigeons or grackles or the occasional song bird. It was just strutting down the sidewalk, though, clearly not interested in my ruminations about how much it didn’t belong in this residential area in the midst of a major city.

I wondered what it was even doing there (as I attempted to sneak up on it for a better photo). Why was it walking through the manicured lawns and neatly trimmed hedges? What would draw a bird like that to a place like this?

And then I saw it snatch a worm out of the grass. Just pluck it right out as if it were the most natural thing in the world, which I guess it was.

Mostly, I thought about how little I know about the world in general and about the specifics of any individual in particular. Too often, I write off the odd duck, the purple cow, as a confused anomaly. Instead, I should probably do a little more work to consider what has brought the strange into the familiar. And I should try to figure out if it’s succeeding and why.

Let me know if you have any guesses for what kind of bird this is. For a few minutes, I hoped for the Grey Crowned Crane, but I’ve only ever seen that in a zoo (it’s a South Saharan bird). Also, it wasn’t nearly so awesome and crowned. Instead, I now think it’s just a grey heron or something.