You are here: Home / The Good Life / Men at work: Whose work matters? 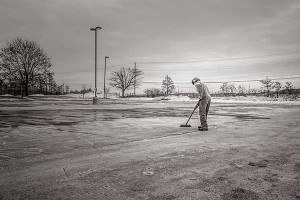 Yesterday on my way into work I saw some utility workers doing something with a traffic signal. They had the cherry picker up, with one guy on top working with wires and such while a few below were looking on and talking, watching traffic. I know, I had the same thought too. Ha, ha, one guy working every else standing, or some version of that. But then I started thinking about why those guys are there.

I admit that I don’t know that much about the kind of work they were doing, which is probably an important step. We all like to judge what we see as slothfulness or inaptitude in others. But how often do we actually know what we’re talking about. From the outside, those guys are standing around, making money for standing around. If I don’t know what their role is, should I be judging their performance?

While I suspect that this tendency to judge is a longstanding trait, I also wonder if it is amplified by our access to spectacle and performance. We watch a quarterback throw an interception and immediately exclaim, “What an idiot. Anyone could see the receiver wasn’t open.” We don’t recognize that our perspective, from a camera dozens of feet in the air, with a wide angle lens, is worlds away from the eyes of the six foot something guy with a helmet and facemask on. We watch a contestant on a game show answer a question wrong and claim, “What an idiot. That’s common sense.” But what is common? Is there really a universal body of knowledge, filled with facts that anyone over a certain age should know? Even if there were, we fail to understand the pressure caused by being the person in the spotlight, with actual money on the line, trying to recall obscure details that she probably did hear at some point.

Maybe the two construction workers on the ground were there for safety purposes. If I’m the guy in the cherry picker, I would probably be happy to know that there were a couple of people on the ground, just watching me. Perhaps the two who appeared to be idle were minutes away from performing some very important task. Maybe one of them is highly skilled at a very particular aspect of the job, and it actually makes sense to pay him to stand around for most of the time because he is so good at the one thing he does. We see that kind of specialization in so many other areas of our lives, why not give the construction workers the benefit of the doubt.

Once I put myself in that mindset, my thoughts turned from “look at these guys doing nothing” to “I wonder what it is like to be that guy.” That guy being the one who comes in to accomplish a very specific task, whose job is so technical or creative that very few people can do it. Rather, very few people have committed the time and effort to learn and practice the skill. That guy being the one who adds so much value that it’s worth paying her to stand around most of the day, or it’s worth it to pay her what seems like an outrageous hourly rate.

It’s a shift that allows me to look at possibilities rather than critique performance. It’s one that keeps me open to new ideas instead stuck in the familiar, but often useless, tropes of assuming we know what other people are up to. It’s a shift that takes some work, and it’s one I’m working on.